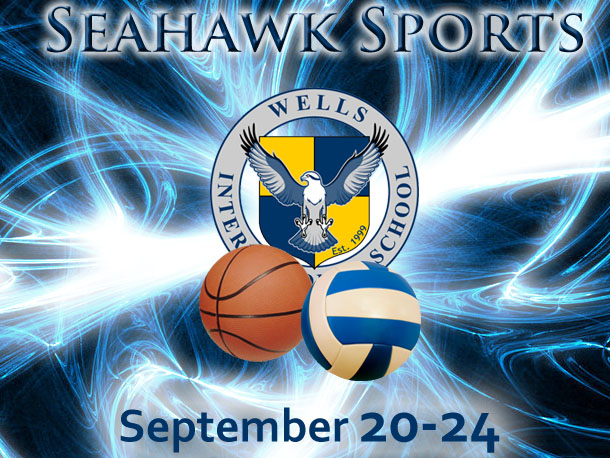 The Seahawk Sports fall season officially is underway with the basketball and volleyball teams playing their first matches of the year.

In basketball, Wells International School teams reasserted themselves as major contenders for the league championships with a very strong start, as four out of five teams scored wins against various TISAC opponents.

On Monday, the Senior Girls team traveled to Bangkok Prep to open their season. Despite the expectedly hostile crowd, the Lady Seahawks cruised to a 31-11 win riding on strong defense and balanced scoring led by freshman center Marin Takahashi with 10 points.

Across town, the Senior Boys faced St. Stephen’s in a much more evenly matched game. Going up against a significantly taller opponent, Wells was able to overcome sloppy shooting in the first half to pull away at the end and win 30-24, let by the scoring of junior point guard Tanapon “Boss” Phuripichet.

Also on Monday, the U11 co-ed team opened up their play against Bangkok Prep. Despite having several players who were participating in an organized basketball game for the first time, the youngest members of the Seahawk basketball program put up a good fight, but just couldn’t get the ball to fall in the basket, losing by a score of 22-6.

The U13 teams continued the action on Tuesday with both the U13 Boys and U13 Girls traveling to Charter International School. The host school put up little resistance as both teams came out ahead with lopsided victories – 24-5 for the boys, and 22-13 for the girls.

On Tuesday, the JV Girls team played the first official sports match in the new coliseum, hosting the Lady Phoenix from Ruamrudee International School. With just barely three months of training, the much less experienced Lady Seahawks were expectedly nervous, succumbing to the visiting team 3-0. Thursday’s visit to Harrow International School started out with more of the same as Wells’ girls struggled to score for the first two games. However, a line-up change by Harrow gave Wells a chance to build up their confidence in a more evenly matched game, thus resulting in their first game win in the young program’s history. Finally, with the match on the line, the hosting Harrow team put in their big players to cruise to a final game victory to seal the match at 3 games to 1.

On the other side of the coin, the JV Boys Volleyball team made a big opening statement by taking on the much more experienced Falcons of NIST. Playing for their first time ever, the young Seahawks were noticeably nervous at first, dropping both games 1 & 2 by the score of 25-23 and 25-21. However, the overconfident Falcon squad played their bench in game 3, allowing Wells to gain just enough confidence to overcome their nervous start, and to beat the Falcons 26-24. In game 4, the Falcons began mixing up their team a bit, but to no avail as the Seahawks cruised to a 25-16 win, knotting up the match at two games each, and forcing a 15-point tie-breaker set. In that final game, the score see-sawed back and forth until a late surge gave NIST quadruple match-point at 14-10. However, not wanting to disappoint the large contingent of Seahawk supporters in the stands, the JV boys ran off six straight points behind the consistent-under-pressure serving of freshman setter Praat “Tan” Sukriket, stunning their hosts 16-14, to win the very first match for the Wells Volleyball Program.

Next week is light week in sports with a friendly basketball game versus BCIS and a couple of league basketball games versus Bangkok Prep. At the end of the week, the Under 15’Boys and Under 15 Girls, both TISAC defending champions, travel to Khao Yai to participate in the 12-team St. Stephen’s Invitational Basketball Tournament.