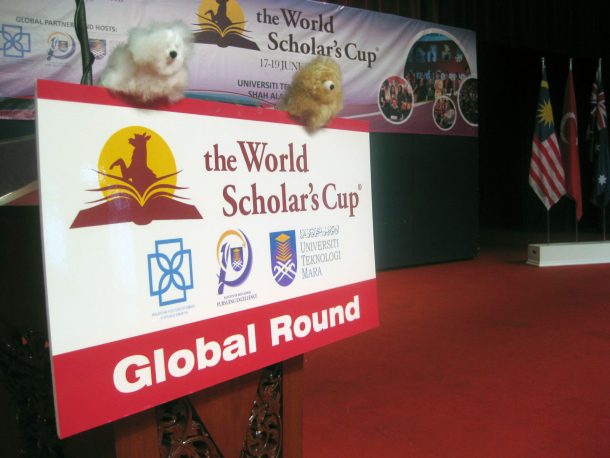 Sophomore Tsai Chi “Cathy” Shang Kuan captured two gold medals – one in the “Science: Biotechnology” category and one in the “Modern Metropolis” category. Her well-rounded performance was also enough to earn her a spot amongst the WSC Top 20 Scholars, placing 15th overall in the Senior Division. This is Cathy’s second year at the international competition, having qualified for the 2010 Global Round held in Shanghai last year.

Ding Shun “Daryl” Ong, another sophomore, rounded off Wells’ domination of the “Modern Metropolis” category, placing 2nd and bringing home a silver medal. Daryl also did well in the Scholar’s Challenge with a 7th place finish.

Aside from the aforementioned students, representing Wells at the World Scholar’s Cup were:

Each year teams around the world compete in various events at national and regional rounds to qualify and prepare for the Global Round. Students write essays, debate on global issues, take an exhaustive exam on topics ranging from art to science, history and literature, all related to one central theme which varies from year to year. This year’s theme focused on the theme “A World Transformed.”

Founded in 2006, the World Scholar’s Cup is not about specialization in any single subject; it is about teamwork, thinking on your feet, and having a willingness to learn new things. Participants have the opportunity not just to win both individual and team awards, but also to explore new subjects and skills not normally covered in school. And, most importantly, students are given the opportunity to experience new cultures and forge new contacts with other future leaders from around the world.