On Wednesday, August 31, both the U17 Boys and U17 Girls teams were in action against the Tigers of BPS. Playing on their home court, the Lady Seahawks were at first noticeably intimidated by the much taller visiting team. However, it didn’t take long for them to realize that the teams were much more evenly matched than they had initially thought. Behind the steady setting of Kanny Smith (Class of 2014) and Pleng (Class of 2016), and with the consistent all-around play of Marin Takahashi (Class of 2014), the girls conquered the visiting Lady Tigers, 3-1.

While the girls took care of business at home, the boys team travelled to BPS in Bangna for their first match of the season. With a returning team virtually intact after last year’s charter season, the Seahawks proved they deserved to play with the “big boys”, powering their way through games 1 and 2 behind the surprisingly consistent jump serves of Joon Young Lee (Class of 2013), power spikes of Kevin Han (Class of 2014) and monster blocks of Matthew Seo (Class of 2015). After a minor letdown in game 3, the team regrouped to cruise to a win in game 4 to win the match 3-1.

For their second match in as many weeks, the U17 Boys team stayed home to take on the Falcons of New International School Thailand (NIST). Despite playing on their home court for the first time this year, there was no sign of nervousness as the Seahawks jumped to quick leads in the first two games and cruised to a 2-0 lead. However, like their previous match, the team experienced a letdown through most of game 3. However, toward the end of that game, the team shook it off to force a deuce situation at 24-24. Despite eventually losing game 3 by a score of 24-26, the momentum had shifted to Wells’ side leading to an easy win in game 4, sealing the match for the Seahawks, 3-1.

The U17 Boys continued their streak by taking a break from their age bracket to test themselves against a higher age bracket when they visited Thai Chinese International School (TCIS) to take on their U19 Boys team on Monday, September 12. The age difference seemed to have intimidated the younger Seahawks as they dropped the first game 22-25. However, after a few “strong” words of encouragement from the coaching staff, the boys regained their confidence, ultimately blowing away the Wolves in three straight games, 25-11, 25-22, and 25-11, for a final 3-1 win. The victory pushed Wells’ record to 3-0 for the season.

Next up for the U17 Boys will be the EIS Varsity Boys Volleyball Invitational on Sunday, September 25. 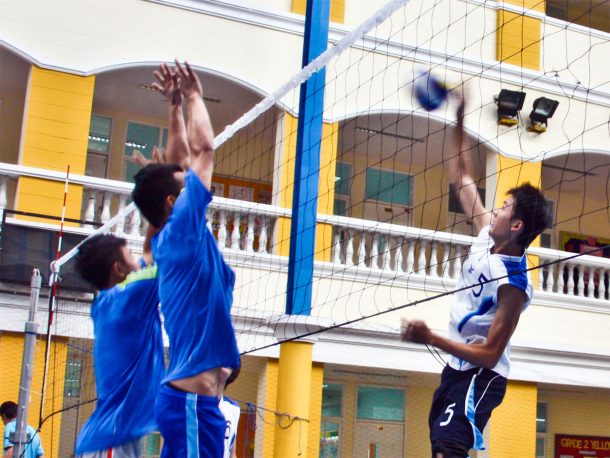